Six area performing groups will combine to present voice and instrumental music during the Encore Musicians Concert on Saturday, April 29, at Chambersburg’s First United Methodist Church. It will be the third annual Encore event sponsored by the Cumberland Valley School of Music.

Free and open to the public, the concert will begin at 1:30 p.m. Off-street parking is available in the lot adjacent to the 225 S. Second St. church.

Representing an important part of CVSM’s mission to provide education and performance opportunities to musicians of all ages, performers will range in age from 40 to 95. 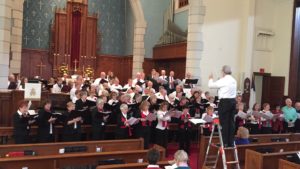 Each group will perform a few tunes in their trademark styles, before all join in for a final number. Back by popular demand, the combined group selection will be Irving Berlin’s “God Bless America,” arranged by Paul Jennings.

New to the concert program are both the Freedom Valley Chorus and the New Horizons String Orchestra.

Around 1997, the Freedom group was chartered in Chambersburg. Castle became a member.

Several of the original Freedom members had experience singing with the Sweet Adelines, another area chorus. The vocalists had relocated to the area and decided to form the new group. Freedom chorus members formed as a chapter of Sweet Adelines, International.

Performance venues of the chorus, according to Castle, are mainly in Franklin County with a few events occurring in nearby Washington County, MD. Freedom vocalists perform for various clubs, retirement homes, Christmas party gatherings, Mother-daughter dinners and other occasions.

Freedom Valley will host its annual Tea on Nov. 11 at the local St. Paul United Methodist Church where its members will be the servers, as well as the performers.

Castle said that she first became interested in the Encore Concert when hearing about it through a Freedom vocalist who performs in the CVSM New Horizons Band.

Currently, the group has 23 active members. More can be learned about the chorus at its website www.freedomvalleychorus.org.

Deborah Stotelmyer is directing the fledgling NH String Orchestra. She is currently a violin instructor for the Cumberland Valley School of Music who has experience as a concert mistress for several area orchestras.

Several years ago, she taught a New Horizons (NH) class at Hagerstown Community College. Stotelmyer said that she often hoped for a NH string ensemble because she could see it would benefit adult string students.

In 2014, CVSM desired to expand the NH program to include a string orchestra at the suggestion of Keith Smith. He then became the first director of the group.

Smith, who is also the CVSM New Horizons Band director, quickly recruited members for the beginning string ensemble. As the NH Band expanded and Smith started an additional NH Beginning Band, he handed the orchestra baton to Stotelmyer in 2016.

Now composed of six violin players, the small orchestra is pleased to make its debut at the Encore concert.

“Our violinists have been playing two-part pieces until we have violists, cellists and maybe a string bass player as part of the group. Interested players may register with CVSM.

“There is also an option to take a 30-minute additional ‘refresher’ class in a group setting right before the main class time, for those who need to brush up on skills,” Stotelmyer added.

For further information about the Encore Musicians Concert, visit the CVSM website, www.cvsmusic.org or call the school at 717-261-1220.