By CVSMMarch 21, 2017Uncategorized
No Comments

Everyone is welcome to attend the spring concert by the Cumberland Valley School of Music Community String Orchestra. Admission is free to the Tuesday, March 28 event being held at 8 p.m. in the Thomson Chapel. Location of the chapel is the Wilson College Campus. 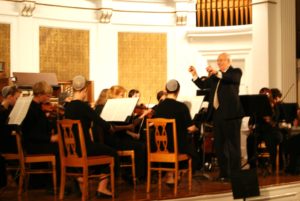 Pianist Brian Helman is returning to perform with the group, according to
Director Herman Hopple. Helman, who is also a CVSM instructor, is slated to perform a challenging Willy Ostyn Piano Concerto.

“Ostyn composed a plethora of works—many similar in style to George Gershwin,” Hopple said, adding that he is looking forward to Helman performing the piece entitled, “Concertstuk voor piano en strikers” with the orchestra. Hopple added that the title indicates a small concerto with piano and strings. The piece is about 20 minutes in length.

A well-known composer in his native Belgium, Ostyn, born in 1913, was seriously studying both piano and organ at the age of sixteen. He graduated with an organist’s diploma and then earned a teaching degree. He taught music education and piano throughout his career, and devoted a great amount of energy to composing. He achieved a degree of renown with the Willy Ostyn Piano Trio. Ostyn said that he saw music as a “spontaneous and logical development of lyrical themes through classical harmony and rich, varying orchestration.”

In addition to the concerto, the orchestra will play two pop tunes, which were arranged by Helman and Hopple. “Embraceable You” and “Fly Me to the Moon” are standards, as well as favorites of the arrangers. Helman will perform on piano with the orchestra on both selections.

“Embraceable You” is a popular jazz song, with music by George Gershwin and lyrics by Ira Gershwin. The song was originally written in 1928 for an unpublished operetta named East Is West. “Fly Me to the Moon”, originally titled “In Other Words”, is a song written in 1954 by Bart Howard. Kaye Ballard made the first recording of the song in 1954. Since then it has become a frequently recorded jazz standard often featured in popular culture. Frank Sinatra’s1964 version was closely associated with the Apollo mission to the moon.

CVSM orchestra members began rehearsing at the end of February. The group is comprised of several area music instructors, in addition to musicians from Chambersburg and surrounding towns. In addition to the Spring Concert, the group gathers together to give a November concert.

A free-will offering to benefit CVSM programs will be accepted following the concert.